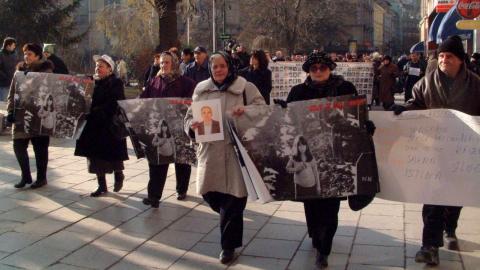 According to the Bosnian Missing Persons Institute, 102 Bosnian citizens, including Andrea Beganovic, were reported missing in neighbouring Croatia as a result of the war in the 1990s.

"Out of that number, 46 victims have been found, exhumed and identified so far, while the search for 56 people continues," said Missing Persons Institute spokesperson Emza Fazlic.

Most of the people reported missing in Croatia were men, but there were also five women and two girls among them.

"The oldest victim who is still being searched for is Mirko (son of Aleksa) Popadic, born in the village of Krmine, near Banja Luka, in 1913. He disappeared in Dragalici, Croatia," Fazlic said.

The first disappearances in Croatia during the war involved a group of Bosnian citizens who attempted to get from Karlovac and other Croatian towns to the Bihac, Cazin and Velika Kladusa areas of north-western Bosnia and Herzegovina in the summer of 1992. This meant travelling across part of the self-proclaimed Republic of Serbian Krajina, an unrecognised rebel Serb region on Croatian territory.

"Unfortunately, some citizens who went missing on that trip were either killed or their fate is simply unknown," said Mujo Begic, the head of the Bosnian Missing Persons Institute's district office in Bihac.

He added that another group of missing citizens attempted to leave the Bihac area, which had been surrounded by Bosnian Serb forces, and travel on foot into Croatia, but disappeared on the way.

The third group of missing people disappeared due to fighting, mainly in the municipality of Velika Kladusa. Yugoslav forces took some captured members of the Bosnian Army's Fifth Corps from Velika Kladusa acroos the border into Croatia, where they executed them.