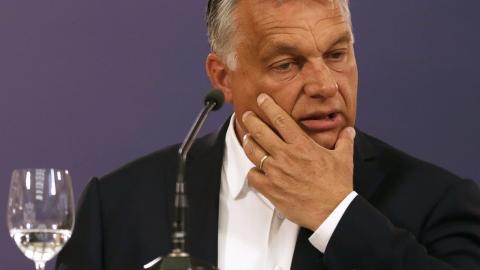 The unexpected move would mean giving up the ability to rule by decree without a time limit — part of a controversial "coronavirus bill" that opponents said also threatened to stifle media independence.

In another surprise step, only five days later, the Hungarian government announced that it was closing down two controversial transit zones along the Serbian border after the European Court of Justice (EJC) ruled it was unlawful to detain asylum seekers for more than 28 days.

Taken at face value, both decisions suggest Hungary is trying to realign itself with Europe after a torrent of international criticism over democratic backsliding and rule-of-law concerns. But some experts suspect Orban may have ulterior motives.

"We welcome the closure of the transit zones," Marta Pardavi, co-chair of the Hungarian Helsinki Committee human rights watchdog, told BIRN. "This is a good direction, but it is important to see what steps will follow. The same applies to the return of emergency powers."

Pardavi said it would have been risky for Budapest to ignore the ECJ's decision, a few days before Germany takes over the rotating six-month EU presidency from Croatia in June. Berlin has already indicated that strengthening the rule of law is a priority.

Since March, Orban has been accused of carving out a dictatorship in the EU after parliament granted him emergency powers without a sunset clause. The strongman premier argued that he needed the ability to rule by decree — and even without parliament, if needed — to respond quickly and resolutely to the...