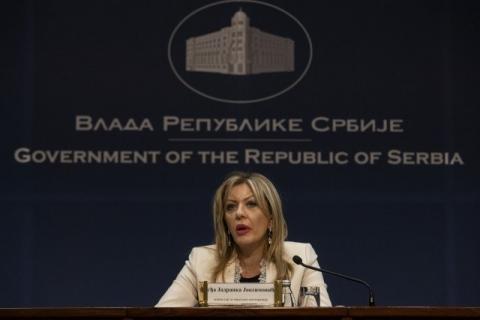 The EP report on the progress of the candidate countries, which also affects the opening of negotiation chapters, has been postponed until the autumn, and the Minister for European Integration Jadranka Joksimovic says that an unofficial report will be prepared which will enable EU members to analyze what has been done in Serbia. In the course of June, some of the chapters we are ready for, will be opened.
Joksimovic explained at the press conference that every year the EC prepares an annual report on the progress of the country that is in the process of negotiations, and that report is usually published in April or May. He adds that in relation to the progress in reforms, especially in the areas of the rule of law, i.e. Chapters 23 and 24, which Serbia has opened, the member states are deciding whether to open new chapters.
"This year, the report was supposed to be in June due to the pandemic, but the EC has decided to postpone the report for all countries in the process until the fall and to combine the report package with the large economic and investment plan for the Western Balkans, as Commissioner Vrhelyi had announced prior to the pandemic, Joksimovic said. As she states, that would put us in a situation where we cannot expect the opening of the chapter.
However, Joksimovic spoke yesterday with Commissioner Vrhelyi, who proposed that a non-paper be drafted, an informal document that would list all matters related to the rule of law, both advantages and delays, so that member states by the end of June, which coincides with the end of the Croatian presidency, could decide whether they would support the opening of a chapter for which we are ready.
"I think that the EC, in this flexible way, by preparing an unofficial report, will give...