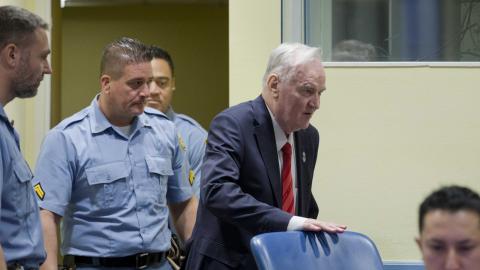 Former Bosnian Serb military commander Ratko Mladic's defence lawyers have requested that appeals hearings scheduled for June 16 and 17 at the Mechanism for International Criminal Tribunals in The Hague be postponed because of restrictions on cross-border movement imposed to prevent the spread of the coronavirus.

They told the UN court that members of Mladic's defence team would not be available to attend the appeals hearing because of the restrictions, which were "beyond our control".

They said in their motion that "to fully preserve and all rights of fair and due process, and professionally fulfil our duties to our client, defence counsel must give notice of unavailability to proceed with the appeals hearings".

The defence motion added that last week, Mladic started a new course of medical treatment and was readmitted to hospital, where checks were performed in relation to his anaemia, after which he was discharged.

The appeals hearings have already been postponed once this year because the former Bosnian Serb military chief needed a colon operation.

A date for the final verdict has not yet been set, but Carmel Agius, president of the Mechanism for International Criminal Tribunals, has previously said it will be delivered by the end of this year.