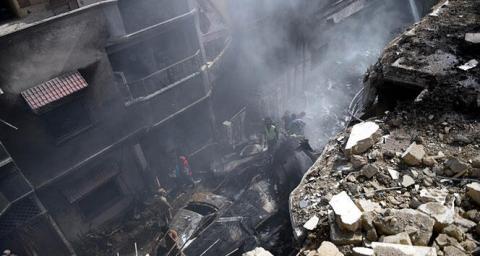 All but two of the 99 people on board a Pakistan passenger plane were killed when it crashed into a residential neighborhood of Karachi, officials said on May 23, as rescue workers toiled through the charred and twisted wreckage strewn across the street.

The Pakistan International Airlines (PIA) plane had made multiple approaches to land at Karachi airport on Friday when it came down among houses, sparking a rescue operation that lasted into the night.

The bodies of all the passengers and crew had been recovered, the Sindh Health Ministry said, adding that 19 had been identified.

DNA testing was being carried out at the University of Karachi to help identify the dead.

Flames and plumes of smoke were sent into the air as the plane came down, its wings slicing through rooftops before crashing onto a street.

Residents were the first to search through debris for survivors, with witnesses reporting the cries of a man hanging from the plane's emergency exit door.

A local hospital earlier reported it had received the bodies of people killed on the ground.

The disaster comes as Pakistanis prepare to celebrate the end of the Muslim fasting month of Ramadan and the beginning of Eid al-Fitr, with many traveling to their homes in cities and villages.

Sarfraz Ahmed, a firefighter at the crash site, told AFP that rescuers had pulled bodies from the Airbus A320 aircraft who were still wearing seatbelts.

Residents near the scene recounted how their walls shook before a big explosion erupted as the aircraft slammed into the neighborhood.

"I was coming from the mosque when I saw the...