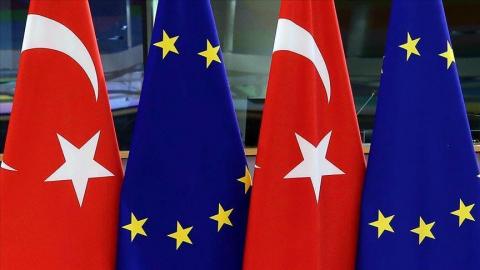 The European Union and Turkey got closer during the fight against novel coronavirus, which claimed hundreds of thousands of lives, a senior Turkish official said on May 22.

"I think coronavirus crisis brought Turkey and the EU closer to each other but also demonstrated what Turkey can do in crisis times for the good and benefit of all of us in Europe," said Deputy Minister of Foreign Affairs & Director for EU Affairs Ambassador Faruk Kaymakcı.

His remarks came during a video discussion with the head of the EU Delegation to Turkey Christian Berger on Turkey's relations with the 27-member bloc.

The virus increased contact between Turkey and the EU as Turkish and European officials have spoken several times about what can be done to tackle the pandemic, including during a conference in early May attended by Turkish
President Recep Tayyip Erdoğan, Kaymakcı added.

Erdoğan told world leaders at the Coronavirus Global Response Summit that any vaccine should be the common property of all of humanity. The EU-hosted conference raised 7.5 billion ($8.2 billion) to help develop a vaccine and treatment.

Turkey applied for EU membership in 1987 and accession talks began in 2005. But negotiations stalled in 2007 due to objections by the Greek Cypriot administration, Germany and France.

Even before the help of EU institutions was available, Turkey was "able to provide some medical assistance to some EU member states as well as some candidate countries," he said.