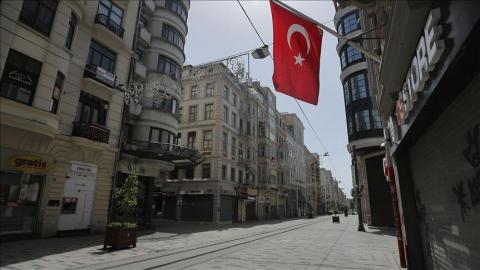 Turkey imposed a four-day nationwide curfew during the Muslim Eid holiday beginning May 22 midnight to curb the spread of the novel coronavirus pandemic that has claimed over 4,200 lives in the country.

Although Turkey usually declares curfew at the weekends in the major cities, this one will cover all country for four days to include the Eid holiday which marks the end of the Muslim holy month of Ramadan.

Also, bakeries will remain open during the four-day curfew.

The first curfew was declared on April 11-12 and followed by others in the past weeks.

Turkey to partially allow collective prayers on May 29

Meanwhile, congregational prayer gatherings in Turkey will be partially allowed starting May 29, the country's Interior Ministry said in a statement on May 22.

Two out of five daily prayers, as well as Friday prayers will be allowed in mosques and prayer rooms in 81 provinces of Turkey only by wearing medical masks and keeping the social distance.

At other times, the mosques will be kept open for those who want to perform individual prayers.

The Friday prayers will not be allowed inside the mosque, said the statement, adding that these prayers could be performed in mosques with available courtyards and open areas determined by the local mufti's offices via the governorships, and the list of mosques and open areas will be announced by latest May 26 via different channels.

The prayers will be kept short and no preaching will be allowed, while imams will need to strictly follow the khutbah, or sermons,...