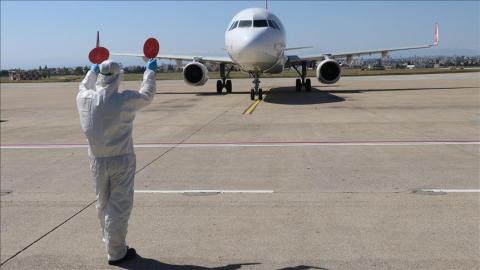 Turkey on May 22 repatriated 84 of its nationals who were stranded for weeks in South Africa and Mozambique after countries closed borders to avoid the spread of the novel coronavirus.

Turkey's Ambassador to South Africa Elif Çömoğlu Ülgen said the Turks were in South Africa and Mozambique for various reasons, including tourism, conferences and business, when the lockdown was ordered.

"Twenty-one Turks crossed the border this morning from Mozambique into South Africa after getting special permits with the assistance of the Turkish embassy in Maputo," Ülgen said, referring to the capital.

She added that the group joined 63 others in Johannesburg who traveled from different provinces across South Africa.

The Turks assembled at the offices of the Maarif Foundation in Johannesburg where they were briefed by the ambassador and later escorted to the airport.

Ülgen said she and her consular staff were happy to send home the stranded Turks in good health.

"This repatriation actually came as a last-minute Eid gift to all of us. To our stranded citizens, to me as an ambassador and to my consular staff. I would like to give special credit to the embassy staff who worked day and night to make this repatriation a success and Insha'Allah (God willingly) once they arrive in Turkey they will also be happily reaching out to their families just in time for Eid and this is going to be our biggest satisfaction and gift," she said.

The diplomat also said two Ukrainian nationals were being repatriated to Istanbul because of an agreement between the two nations. She said the Ukrainian embassy in Turkey will receive the pair and later return them home.
Ülgen said 61 South Africans left Istanbul for Johannesburg on a Turkish...