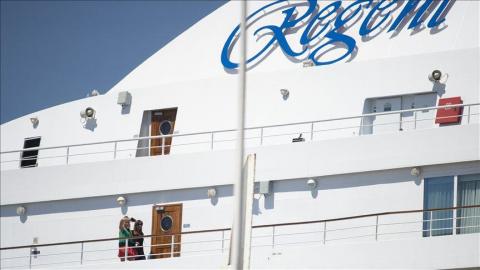 Fifteen Turkish crew members from a cruise ship headed home on May 22 from Barcelona, Spain after spending 65 days at sea during a coronavirus quarantine.

The group working on a ship affiliated with a large U.S.-based company was forced into quarantine after cruise ships stopped operations.

The trip home for the group, some of whom have been offshore for five months, began in the Bahamas, and passed respectively through Barcelona, Amsterdam and Sofia, Bulgaria.

In Bulgaria, they will board a bus for the last leg of their journey where they are expected Saturday to enter Turkey via
northwestern Edirne province, which borders Bulgaria and Greece.

Deputy General Manager on the ships, Zafer Dal, told Anadolu Agency more than 10,000 personnel from 45 countries work at the company and the ship docked in a port in Barcelona. Thanks to the "great help and dedication" of

Turkey's Consulate General, the crew members managed to get return permission.  "If our Foreign Affairs Ministry and our Consulate General in Barcelona did not care so much about us, we couldn't return to Turkey now. If we can return home, it is thanks to them," he said.

Turkey's Consul General in Barcelona Güçlü Kalafat said the evacuation was possible because of the coordination of the Foreign Affairs Ministry through a coordinated operation with embassies in Madrid, the Hague and Sofia and the
Consulate General in Amsterdam.

"We are delighted to have our citizens meet their families during Ramadan feast," Kalafat said, referring to the end of the holy month of Ramadan which will be celebrated on May 24.