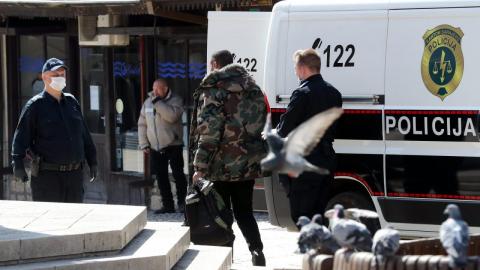 The State Prosecutor's Office of Bosnia and Herzegovina is investigating a second allegation concerning the illegal issue of tourist visas, this time concerning Iraqi citizens, Boris Grubesic, a spokesman for the office confirmed to BIRN.

"We have visa-related cases in Iraq and Pakistan. Since both cases are pending, we cannot provide more information," Grubesic said.

According to Bosnian media reports, the disputed tourist visas for Iraqi citizens were issued at the embassy in Amman, Jordan, which also covers nearby Iraq. The Iraqis came to Bosnia as tourists and had an agreed route of arrival and accommodation in a hotel in Sarajevo, Bosnian media said.

In September last year, Border Police returned 50 Iraqi citizens who had tourist visas from Sarajevo Airport. They had arrived by plane from Istanbul, to where they were returned. The Iraqis told the members of the Border Police that they paid 1,000 euros each for the visas issued at the embassy in Amman.

"The Iraqi citizens had tourist visas that were annulled after it was determined that they could not justify their intention to stay in Bosnia," the border police said at the time.

The Bosnian Ambassador to Amman, Mato Zeko, told the media on May 23 that the accusations were muddled. He insisted that the process of obtaining visas was clearly defined and included checks by security agencies and that no one could enter the country with a forged visa.

"I think it's a continuation of the story with Pakistan, and I'm really surprised that something like that is being made public … The embassy in Amman issued a total of 294 visas for Iraqi citizens for the whole of 2019. And now someone is talking about thousands of visas," Zeko told the regional broadcaster N1 television on...