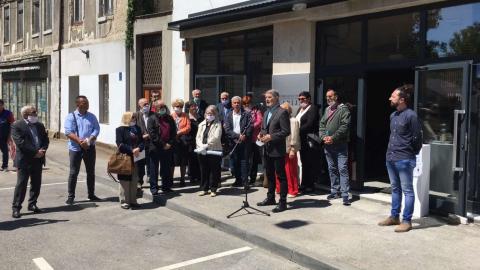 The 25th anniversary of the shelling of the Kapija area of Tuzla by the Bosnian Serb Army was marked on Monday with the laying of flowers at the cemetery where most of the 71 mainly young people killed in May 1995 are buried, which was due to be followed by the symbolic sounding of an air-raid siren in the evening.

There was no large organised commemoration this year due to the coronavirus pandemic, but locals were invited to come individually to pay tribute at the site of the massacre.

The Kapija Memorial Centre opened on Friday ahead of the anniversary. It will commemorate those who were killed and act as a repository for documents and evidence about the 1995 attack.

The mayor of Tuzla, Jasmin Imamovic, said that the evidence stored at the centre will serve as a reminder of what happened and a warning that such crimes must not be repeated.

"This evidence will not be available only to visitors, but anyone from anywhere in the world will be able to visit it online," Imamovic said.

BIRN gave the memorial centre a documentary film and an archive of articles about the attack on Tuzla and the trial of the man found guilty of ordering the shelling, Novak Djukic, the wartime commander of the Bosnian Serb Army's Ozren Tactical Group.

"We have donated a complete archive of the monitoring of the proceedings, all the testimonies, all the evidence, all the articles, to the city of Tuzla, so they can be displayed in Bosnian and English at this memorial centre," said Denis Dzidic, director of BIRN Bosnia and Herzegovina.

Djukic was found guilty by the Bosnian state court of ordering the attack but left for Serbia for medical treatment in June 2014 and did not return.

Bosnia issued an arrest warrant for him in October 2014 because...