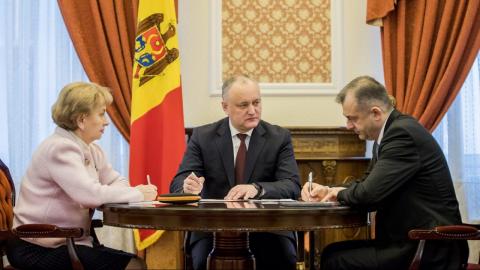 Romanian parliamentarians have called on Bucharest to withdraw the Romanian citizenship of the Moldovan Prime Minister, Ion Chicu, after he suggested that Romania was one of the most corrupt countries in Europe, and used harsh language about Romanian officials.

"As a Romanian deputy, I ask the authorities to authorize the withdrawal of Romanian citizenship for Ion Chicu," deputy Constantin Codreanu, who has Moldovan origins, wrote on Facebook on Sunday.

Chicu made the controversial remarks after getting into a fight on Facebook with Romanian MEP Siegfried Muresan.

"I sit and watch these little Romanian boys scattered in the European structures who come with 'patronage' over us … Losers - no achievements in their lifetime or in their country," Chicu wrote on Facebook on Friday night. "What have you done in your country, which is groaning with the worst corruption in Europe?" he added.

The verbal sparring began after Muresan, chair of the European Parliament Delegation to the EU-Moldova Parliamentary Association Committee, said the Moldovan government Chicu chairs had failed to implement reforms and tackle corruption.

The current government in Chisinau is composed of the pro-Russian Socialist Party, PSRM, and the Democratic Party. The Democratic Party has distanced itself from Chicu's words but also criticised Muresan's statements about lack of reforms.

Romania meanwhile said it was summoning the ambassador to Chisinau, Daniel Ionita, back to Bucharest for consultations. The foreign ministry said it considered Chicu's statements "completely unacceptable and expresses its strong disagreement with their content".

Bucharest added that Chicu's accusation were all the more improper as, in the context of the COVID-19 pandemic,...