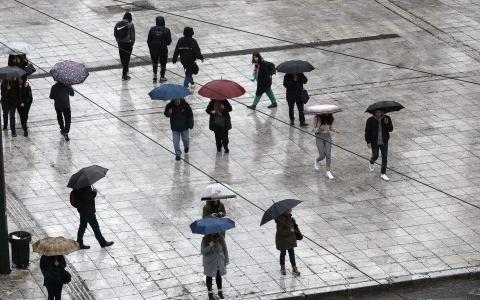 The National Observatory of Athens (NOA) on Tuesday issued an alert warning of powerful storms in many parts of the Greek mainland, as well as in the eastern Peloponnese, Crete and the islands of the northern and eastern Aegean.

The NOA's Meteo weather service said that the stormy weather was expected to sweep into Greece around midday on Tuesday and persist through Wednesday morning at least.

It will be accompanied by strong northerly winds reaching speeds of 7-8 Beaufort in the Ionian Sea and 6 Beaufort in the Aegean, as well as displaying powerful gusts that may make sailing treacherous.

Mainland areas like Epirus, Central Macedonia and Thrace should brace for the possibility of hailstorms later in the afternoon, spreading to the eastern Aegean overnight.

Thunder and lightning are also in the cards and will be intense in parts of northern and central...

Costas Karamanlis: The signing of the contract for E65 highway on Thursday

Week in Review: Reshuffling the Cards