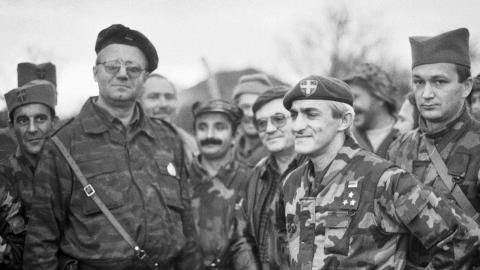 He has also said that he favours early release from prison for Milorad 'Legija' Ulemek and Zvezdan Jovanovic, who are serving sentences for the assassination of Serbian Prime Minister Zoran Djindjic in 2003. He said that they should be freed because "they are heroes" who fought on behalf of Serbs.

The other war criminal who has announced his candidacy is ultranationalist Serbian Radical Party leader Vojislav Seselj, who was convicted by the Mechanism for International Criminal Tribunals of committing war crimes against Croats in his own country in 1992.

Veteran politician Seselj was already an MP in Serbia's last parliament - even though his conviction should have disqualified him from sitting in the legislature - and he is now running again.

Jovana Kolaric, a researcher at the Humanitarian Law Centre, a Belgrade-based NGO that deals with war crimes in the former Yugoslavia, said that there is a contradiction between the rhetoric of the Serbian government about focusing on the future and its practice of glorifying people who committed war crimes in the past.

"'Looking to the future', Serbia prints and promotes books by people convicted of war crimes, cites their wartime experiences as an example, and pays tribute to them in various ways," Kolaric said.

Last year, the Serbian Defence Ministry organised an event to promote a book that denies Bosnian Serb forces were responsible for the massacre of 71 people in Tuzla in Bosnia in 1995, and another event to promote a book by former Yugoslav Army general Nebojsa Pavkovic, who is currently serving a prison sentence for war crimes in Kosovo.

Dragan Vasiljkovic listens to the verdict at his trial in Split, Croatia in...