Russia sent jets to Libya to back mercenaries, says US 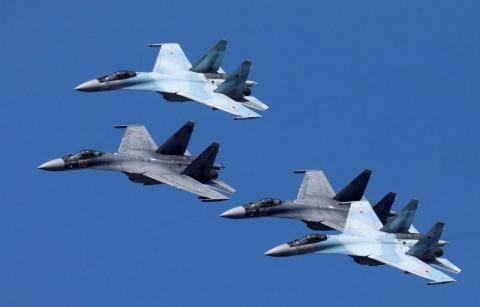 Russia recently sent fighter jets to Libya to support Russian mercenaries fighting for strongman Khalifa Haftar in the long-running conflict, the U.S. military said on May 26.

The warplanes left Russia and first stopped in Syria, where they "were repainted to camouflage their Russian origin" before arriving in Libya, said the U.S. military command for Africa (Africom) in a statement.

Stuttgart-based Africom did not specify when the jets flew in, saying only that it was "recently".

But it appeared to be the latest violation of the nine-year-old U.N. embargo on sending arms into Libya.

In Washington, Pentagon spokesman Jonathan Hoffman said that the Russians had sent a mix of "approximately 14 military fighters."

Africom posted pictures of the Russian aircraft on its Twitter feed, including one that it said showed several MiG-29 Fulcrum jets and Su-35 Flankers parked at an airbase.

The claim comes a day after Libya's U.N.-recognised government said hundreds of Russian mercenaries backing rival military commander Haftar had been evacuated from combat zones south of the capital Tripoli.

The alleged retreat follows a series of setbacks for Haftar's years-long offensive to seize the capital from the Tripoli-based Government of National Accord (GNA).

The Kremlin has always denied involvement in the conflict. When contacted by AFP, the Russian defense ministry said it would "not comment right now" on the Africom statement.

But Andrei Krasov, a member of the defense committee in Russia's lower house of parliament, dismissed the allegation as "fake" news.