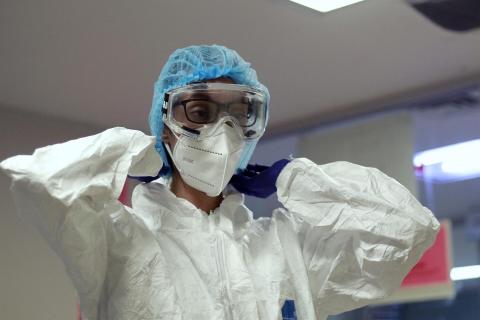 South Korea reported its highest number of new coronavirus infections in weeks on May 27 and India reported another record single-day jump of more than 6,000 cases, as the pandemic expanded its grip across much of the globe.

Still, optimism over reopening economies from business shutdowns to fight the virus spurred a rally on Wall Street, even as the official U.S. death toll approached 100,000.

Outbreaks are still climbing in much of the Americas, while many countries in Asia and much of Europe are making steady progress in containing the deadliest pandemic in a century.

New Zealand's Ministry of Health reported on May 27 that there were no COVID-19 patients under treatment in hospitals. The nation took aggressive and early action to stop transmissions and has reported only 21 deaths. It has 21 active cases out of 1,504 confirmed and probable ones.

In South Korea, 40 newly confirmed cases the biggest daily jump in nearly 50 days raised alarm as millions of children were returning to school.

All but four of the new cases were in the densely populated Seoul region, where officials are scrambling to stop transmissions linked to nightclubs, karaoke rooms and an e-commerce warehouse. South Korea has reported 269 deaths and 11,265 cases, after managing to contain a severe earlier outbreak.

Authorities were testing 3,600 employees of a local e-commerce giant, Coupang, after discovering dozens of coronavirus infections linked to workers at the company's warehouse near Seoul.

India saw another record single-day jump, reporting 6,387 new cases on May 27, as the government prepared new guidelines for the next phase of a 2-month-old national lockdown that is due to end on May 31.

In the Americas, from Mexico to Chile,...