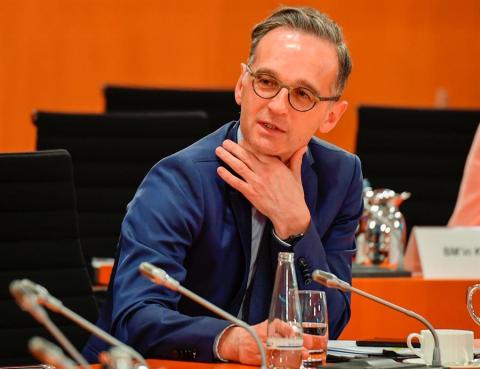 Germany will lift a travel ban for fellow European Union countries from June 15 and is considering removing the curbs for third nations, including Turkey, German Foreign Minister Heiko Maas has said.
The decision regarding Turkey will depend on the situation in Turkey, he said, adding that they would be looking at the hygiene rules implemented in the country's beaches and hotels as well as the number of coronavirus cases.
Maas reminded that Turkey has taken very strict measures against the spread of COVID-19 and said that they will hold talks with Turkish officials regarding the issue.
In an article that appeared in German media last week, Turkish Foreign Minister Mevlüt Çavuşoğlu invited German holidaymakers to Turkey this summer and said that Germany company TÜV Sud will certify Turkish hotels.
Çavuşoğlu earlier this month held a phone conversation with Mass to discuss tourism.
Turkey has engaged in telephone diplomacy with 70 countries to inform them about the country's health infrastructure over the pandemic.
The country's Culture and Tourism Ministry launched a "healthy tourism certification" project to ensure fulfillment of high health and hygiene standards at airlines, airports and other transportation facilities, accommodations and food venues.
The country also sent letters of intent to those 70 countries - which preferred Turkey the most as a tourist destination in recent years - including Germany, the U.K., Netherlands, Belgium, Japan, Russia and Czech Republic.
Turkey is one of the major holiday destinations for German tourists.
Last year, more than 5 million German holidaymakers visited Turkey, accounting for nearly 12 percent of all foreign tourists.
In 2017, 4.5 million Germany nationals vacationed in...