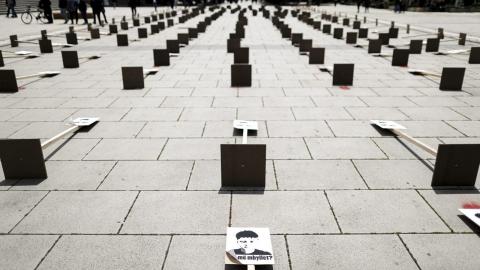 Agon Musliu, from Gjilan/ Gnilanje, was put in 14-day quarantine after returning from Germany from his graduate studies.

The University of Pristina students said government institutions needed to accept responsibility for the young man's death, which they attributed to institutional neglect and to failure to "acknowledge his health problems… and not allow his parents to meet him…  and his right to self-isolate".

The students held placards in the grounds of the main Skanderbeg Square in front of the government building in Pristina. "Silence kills more … Why did you lock me up?… I had no one to protect me," some of the placards read underneath Musliu's image.

Musliu's father, Naim Musliu, told the local media outlet Klan Kosova on May 4, one day after the death of his son, that Agon had had health issues with his kidneys and had not been feeling well emotionally.

"The worst is that I was not allowed to see him either in the airport or in quarantine," Musliu said, adding that he held Prime Minister Albin Kurti, Health Minister Arben Vitia and acting Interior Minister Xhelal Svecla "responsible for his death".

The state-run quarantine system was created to isolate people for 14 days after they return from abroad as a prevention measure against the spread of COVID-19. The prosecution is still investigating the case, to clarify the circumstances of the death.

This was not the first protest held in Kosovo during the coronavirus pandemic. In March, many citizens protested by banging domestic utensils on their balconies, calling on political leaders to leave their political interests aside, before the no-confidence motion in parliament toppled the Kurti-led government on March 25.