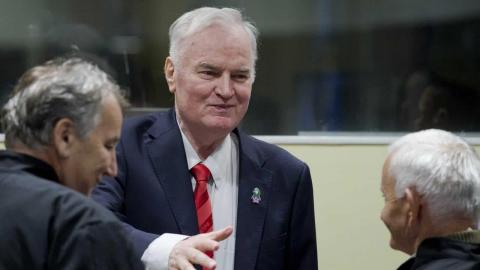 The Mechanism for International Criminal Tribunals in The Hague said on Thursday that it has postponed next month's appeals hearings in the Ratko Mladic case because of travel restrictions imposed due to the coronavirus pandemic.

The UN court was due to hear defence and prosecution appeals on June 16 and 17 against the former Bosnian Serb military chief's verdict convicting him of genocide and other wartime crimes in Bosnia and Herzegovina.

But it said that coronavirus travel restrictions mean that "there are no available flights that four of the judges could use to travel to the Netherlands to meet the quarantine requirement in time to attend the appeal hearing".

It also said that was not advisable for Mladic, who is 77 and has had several illnesses, to attend the hearings "as he is part of a 'high risk group' due to his age and medical history".

The court's statement further noted that its current technological capabilities "do not allow for the possibility of conducting the appeal hearing with the remote participation of all those who cannot safely attend it in person".

The appeals hearings have been postponed "until further notice", it added.

The appeals have already been postponed once this year because the former Bosnian Serb military chief needed a colon operation.

Mladic appealed against the verdict, as did the Hague prosecution, which is calling for him to be found guilty of genocide in six other...