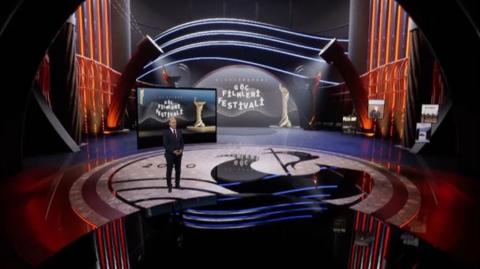 Turkey has successfully passed the "migration" test by hosting millions of refugees on its soils for years, while even the most developed nations have failed in doing so, Interior Minister Süleyman Soylu has said at an online opening of the International Migration Films Festival.
"Turkey has given a successful response to migration," Soylu said at the online press conference of the festival on May 28.
Many European nations failed to give an adequate humanitarian response to the migration crisis, the minister said, although underlining that aging countries like Germany will eventually have to ask for more refugees.
The festival will feature films devoted to the global migration question to create awareness over the growing problem while hosting more than 50 guests, including directors, Soylu stressed.
"One of the most important stories of this century is migration. We have to ask what migrants would do when they have to leave their home. No water, no education, no justice…" Soylu said, adding, "None of us had predicted the 21st century to be like this. Despite the ignorance of the world, we are, as the sons of a great nation, not going to turn our backs on our past and neighbors."
It's wrong to think that the migration problem is limited to Syrians fleeing the violence in their own country, because Turkey hosts tens of thousands of refugees from various countries, the minister added.
Upon a question, Soylu said many developed Western countries have wanted to select qualified Syrian refugees, such as engineers and academics, but Turkey has taken measures to "prevent this cherry-picking."
"We have given citizenship to a sizeable part of these people. We think we have taken preventive measures to keep these people who could add value...