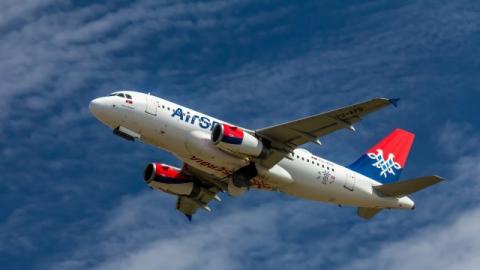 It is planned that Air Serbia will start renewing flights from Nis on June 16, while the planes of the Serbian national airline from Kraljevo will fly starting on June 30, 2020, the national airline announced.
In the period between June 16 and 30, the routes from Frankfurt (Han) and Nuremberg will be restarted from Nis, while after July 1, they will also fly to Hanover, Salzburg and Tivat. As for Kraljevo, the renewal of flights to Vienna is planned for June 30. The exact flight schedule and weekly frequencies will be published soon on airserbia.com, it was announced.
"Conditions have been met for us to gradually renew flights from Nis and Kraljevo. This is great news for our passengers from southern and southwestern Serbia, who have been eagerly awaiting this news. Over the past two and a half months, we have been constantly asked questions about it. When we will resume traffic from these two cities, it is a great pleasure for all of us at Air Serbia to be able to confirm that we will resume flights from Nis on June 16 and from Kraljevo on June 30. Very soon, the long-separated family members and friends will be able to meet again, followed by businessmen and tourists who will welcome the flights renewal", Duncan Naysmith, Chief Executive Officer of Air Serbia, stated.
He added that the renewal of flights to other destinations to which they flew from Nis and Kraljevo will be done during the next period, with careful monitoring of the situation and consideration of all factors, it is stated in the announcement.