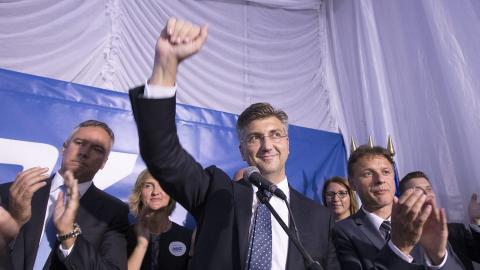 The government stressed the need to create new jobs and reduce unemployment, and for demographic renewal - which it was planning to assist by offering financial compensation to parents of newborn children.

Prime Minister Plenkovic also repeated an old promise of past HDZ governments, which was to connect the Croatian mainland with its southernmost region by a new bridge - the Peljesac Bridge.

A car passes in front of the INA gas station in downtown Zagreb. Photo: EPA/ANTONIO BAT.

Shortly after the installation of the new government, on Christmas Eve 2016, Plenkovic announced a buy-out of the energy company INA from the Hungarian giant MOL.

"This is financially sustainable and will not increase the public debt of Croatia … It is my responsibility to inform the public about this strategic decision immediately," Plenkovic said.

Croatia started to privatise INA in 2002. Within a decade, the Hungarian energy giant MOL had become its biggest shareholder. By 2012, it owned 49 per cent of INA, with the Croatian government owning 45 per cent.

The sale was highly compromised by revelations of the corrupt dealings of former Croatian Prime Minister Ivo Sanader and MOL's top executive, Zsolt Hernadi, which later landed Sanader in jail.

So far, little progress has been made in buying back MOL's stake in INA.

The government formed an expert council in January 2017 to negotiate with MOL about the possible buyout of INA shares and in April 2018 it selected a joint bid by three banks to appoint investment consultants to handle the buyout.

But in August 2019, the government replaced them with New York-based Lazard Bank. Finance Minister Zdravko Maric said this was...