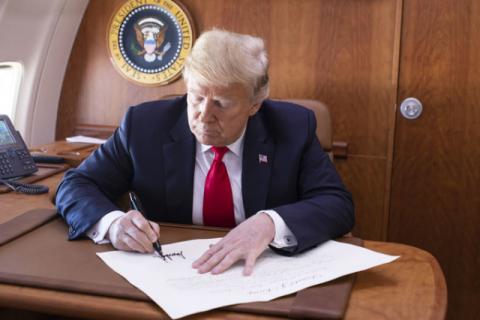 President Donald Trump said he will introduce legislation that may scrap or weaken a law that has protected internet companies, including Twitter and Facebook, in an extraordinary attempt to regulate social media platforms where he has been criticized.

The proposed legislation is part of an executive order Trump signed on Thursday afternoon. Trump had attacked Twitter for tagging his tweets about unsubstantiated claims of fraud about mail-in voting with a warning prompting readers to fact-check the posts.

Trump wants to "remove or change" a provision of a law known as Section 230 that shields social media companies from liability for content posted by their users.

On Wednesday, Reuters reported the White House's plan to modify Section 230 based on a copy of a draft executive order that experts said was unlikely to survive legal scrutiny. The final version of the order released on Thursday had no major changes except the proposal for a federal legislation.

"What I think we can say is we're going to regulate it," Trump said before the signing of the order.

Twitter called the order "a reactionary and politicized approach to a landmark law" and said attempts to weaken Section 230 would "threaten the future of online speech."

A Google spokeswoman said the order would harm "America's economy," while a Facebook spokesman said it would "encourage platforms to censor anything that might offend anyone."

The order, as written, attempts to circumvent Congress and the courts in directing changes to long-established interpretations of Section 230. It represents his latest attempt to use the tools...