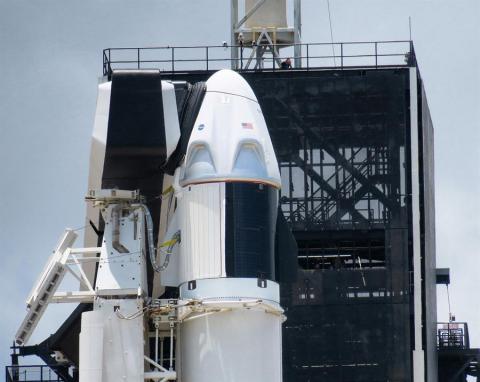 SpaceX pressed ahead with its second attempt to launch astronauts for NASA- a historic first for a private company- but more stormy weather threatened more delays.

Elon Musk's company came within 17 minutes on May 27 of launching a pair of NASA astronauts for the first time in nearly a decade from the U.S., before the threat of lightning forced a delay.

With more storms ahead, managers debated on May 29 whether to bump the next launch attempt from May 30 to May 31 to take advantage of slightly improved forecast at Kennedy Space Center.

At an earlier outdoor news conference, Bridenstine stressed the need for safety for astronauts Doug Hurley and Bob Behnken _ no matter how many times it takes to launch them in a SpaceX Dragon capsule atop a SpaceX Falcon 9 rocket to the International Space Station.

Forecasters put the odds of acceptable weather conditions Saturday at 50-50, with the outlook improving to 60% favorable on May 31. Rain and clouds were the main concerns for both days.

Bridenstine said back-to-back tries would be tough on the launch team and the astronauts given that this is a test flight.

Hurley and Behnken, veterans of two space shuttle flights, have both faced launch delays before. In a tweet Friday, Hurley said his first shuttle flight was scrubbed five times for weather and technical issues.

"We're ready for the next launch opportunity!" Behnken tweeted.

While NASA had urged spectators to stay home Wednesday because of the pandemic, prime viewing spots at area parks and beaches were packed. A weekend launch could draw even bigger crowds. The...