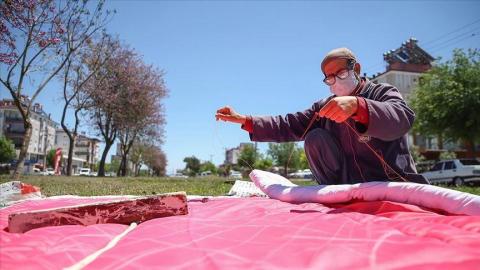 A man who earns a living by sewing quilts in the Mediterranean province of Antalya has been carrying out his profession for 45 years under redbud trees that have dotted the city for decades.

The 58-year-old Veli Yıldırım, who began working with a needle and thread for the first time at the age of 13, said that almost all his life was spent by sewing quilts.

Yıldırım, who tries to complete the orders he receives outdoors and under the shadow of the trees, is also one of the well-known figures of the city.

"There are three or five people left doing this job in Antalya. I will continue to work as long as my strength and lifetime allow me to," Yıldırım said, complaining that his traditional profession is becoming extinct.

He started his career as an apprentice when he was a little kid, but later raised his skills to a level of mastery in time.

Underlining that his profession is difficult but he has been doing it for years, Yıldırım said that he usually works on orders, creating pillows, cushions and quilts from the countryside.

Complaining that young people do not show interest in handicrafts, he emphasized that there were people who came to learn this work for the first time, but there was no interest anymore.

"The money I earned is enough for me. Fortunately, I can pay my rent and my bills," he said, when asked if his earnings are sufficient.