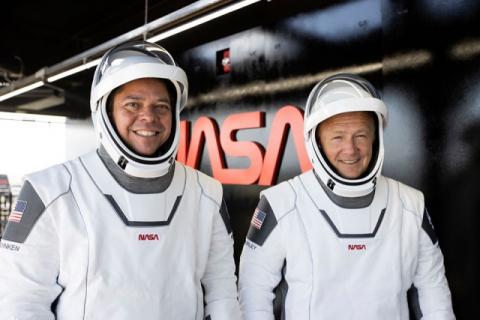 After nearly two decades of effort, Elon Musk's aerospace company, SpaceX, successfully launched its first two people into orbit, ushering in a new age of human spaceflight in the United States. The flight marked the first time astronauts have launched into orbit from American soil in nearly a decade, and SpaceX is now the first company to send passengers to orbit on a privately made vehicle.

The two astronauts — veteran NASA fliers Bob Behnken and Doug Hurley — rode into space inside SpaceX's new automated spacecraft called the Crew Dragon, a capsule designed to take people to and from the International Space Station. Strapped inside the sleek, gumdrop-shaped capsule, the duo lifted off on top of SpaceX's Falcon 9 rocket from NASA's Kennedy Space Center in Florida at 3:22PM ET on Saturday. The rocket dropped the Crew Dragon off in orbit about 12 minutes later. Now, the pair will spend roughly the next day in orbit before attempting to dock with the International Space Station on Sunday morning.

THIS MISSION CARRIED ENORMOUS WEIGHT FOR THE UNITED STATES

In Case You Missed the Launching Watch Here:

"Bob and Doug, on behalf of the entire launch team, thanks for flying with Falcon 9 today," Crew Dragon's chief engineer said to the two astronauts after they reached orbit. "We hope you enjoyed the ride and wish you a great mission." SpaceX's Falcon 9 rocket also successfully landed on one of the company's drone ships following takeoff, making for a smooth launch throughout.

This launch is a critical moment for SpaceX, a company formed by Musk with the express purpose of sending humans into space and building settlements on Mars. It's also the final major test for SpaceX as part of NASA's Commercial Crew Program. Through...