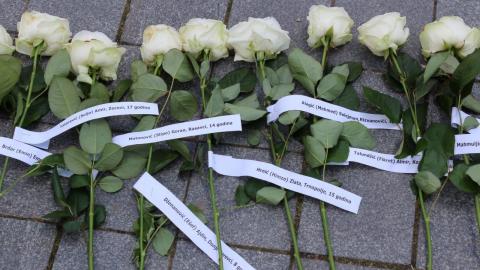 The commemoration was a scaled-down version of the annual White Armband Day event in Prijedor, where large-scale crimes were committed during the war including killings, expulsions and the unlawful detentions of civilians in prison camps.

Due to the coronavirus pandemic, this year the authorities only gave permission for 50 people to attend the commemoration, which was organised by a group of activists called Jer Me Se Tice (Because it Concerns Me).

The white armbands are worn, according to the organisers, because the wartime Bosnian Serb authorities in Prijedor issued a decree that was broadcast on local radio in May 1992 ordering all non-Serbs to mark their houses with white flags or bedsheets and to wear white armbands when leaving home.

"There was an order to hang white sheets and put white ribbons around one's arm so it was known who was who, and which was a signal that someone did not belong to a certain part of the population, that they were marked for repression, which then happened," Fikret Bacic, a representative of an organisation called the Parents of the Murdered Children of the City of Prijedor, told BIRN ahead of Sunday's event.

Campaigners have long been calling for the construction of a permanent memorial to the victims but the Serb-led local authorities in Prijedor refused to allow a monument to be built in the town centre.

But Bacic told media on Sunday that an agreement had finally been reached to build the monument.

"Now we just have to decide on the location," he said, N1 TV reported.