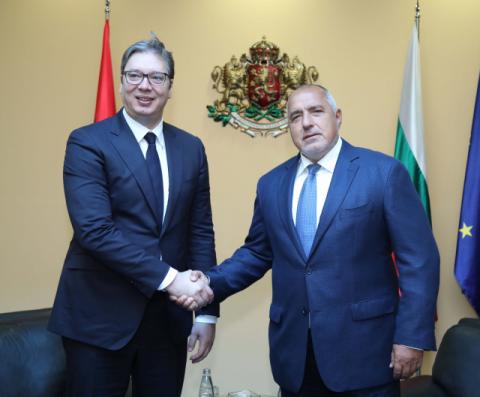 Prime Minister Boyko Borsov and Serbian President Alexander Vucic inspected the construction of Balkan Stream by helicopter. The project is a priority for the Bulgarian government.

Its implementation aims to increase the security of natural gas supplies from various sources, increase competition and transparency of the natural gas market, which in turn will have a positive effect on natural gas consumers.

As a key project for market integration, Balkan Stream will contribute to ensuring the supply of natural gas to the country and the region, while contributing to the creation of real conditions for diversification of sources and routes and the possibility of transporting additional quantities of natural gas to and through Bulgaria.

"Everything is according to the rules of the European Union," said Prime Minister Borissov during the inspection.

Prime Minister Boyko Borissov and Serbian President Alexander Vucic also inspected by helicopter progress on the construction of the Europa Motorway in the area of ​​the 17km section between Dragoman and Slivnitsa.

The value of the investment is BGN 117 million and is financed entirely from the national budget. The section will have two road junctions with lighting - "Slivnitsa 1" and "Slivnitsa 2", as well as 11 large facilities - 5 overpasses, 5 underpasses and a bridge over the river Slivnishka. The planned eco measures are strictly implemented on the site.