Erdoğan says 'not a single mosque left in Athens' 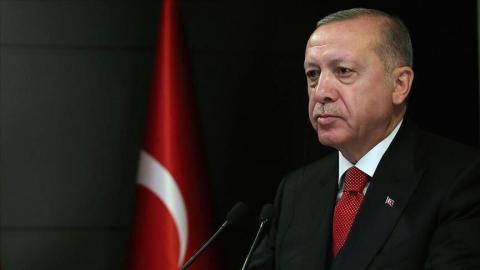 There is not a single mosque in Athens right now as all of them have been destroyed, the Turkish president said on May 31.

"Not a single mosque of ours still stands in Athens. They were all razed to the ground. But we did not resort to such ways in a city like Istanbul," said President Recep Tayyip Erdoğan, referring to the 567th anniversary of the conquest of city, which was marked on May 29.

"Our mosques and symbolic monuments in places where we had to leave a century ago were destroyed in a short time."

Speaking during the opening ceremony for Hadımköy Dr. İsmail Niyazi Kurtulmuş Hospital in Istanbul, Erdoğan said that when Sultan Mehmet Han -- also known as Mehmet the Conqueror -- conquered Istanbul, he was not welcomed as an enemy but like an "expected savior."

"Our ancestors regarded conquest as not merely taking more lands but winning over hearts," he said.

"Hagia Sophia was opened to the service of Muslims as their right of conquest by making it even more beautiful instead of razing it to the ground because of a religious animosity," he said, adding other places of worship were not touched and were maintained to meet the needs of the community.

"Only this picture is sufficient to demonstrate the magnanimity of our ancestors," he added.

Erdoğan underlined that in the past century, the country has not been "successful enough" in keeping alive the relics of its ancestors.