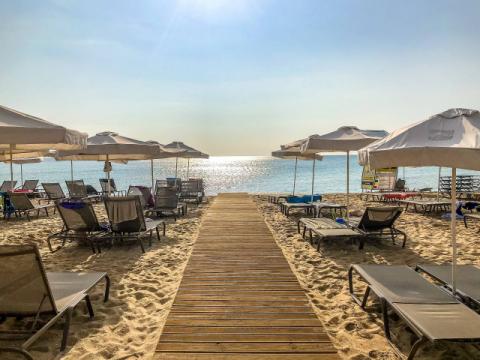 There are already 25 beaches on the Bulgarian Black Sea coast, which offer the use of free umbrellas and sunbeds for the active summer season of 2020, the Ministry of Tourism announced.
During the last week of May, the tenants and concessionaires of the sea beaches had to send to the Ministry of Tourism their proposals for reducing the prices of beach accomodations. According to the legal changes, the decrease must be at least 50 percent compared to the prices in 2019.
According to the received proposals, the umbrellas and sunbeds on the following beaches will be free:

Duni-south (Burgas region);
Mladost MMC (free umbrella, deck chair BGN 2.50 each),
Primorsko-Central (Burgas region);
Camping-south,
Mechata dupka 2,
Lozenets,
Popski beach-north 5;
Tsarevo-central,
Camping Nestinarka (Burgas region).
The prices on the majority of the other beaches vary up to BGN 5, ie. the decrease is serious compared to last summer. In Golden Sands, for example, beach accomodations will be BGN 2 each, in Sunny Beach - BGN 4 each, in Albena - BGN 1 each.

Bulgarian Hotel- and Restaurant-Keepers Lash out at Vaccination Stickers

Direct flights from Bulgaria to Seychelles to Be Launched This Autumn

Never Forget Your Past! New Life for Buzludzha Monument - Bulgaria

Bulgaria and Moldova Head for Polls on July 11, What Similarities Two States Share?