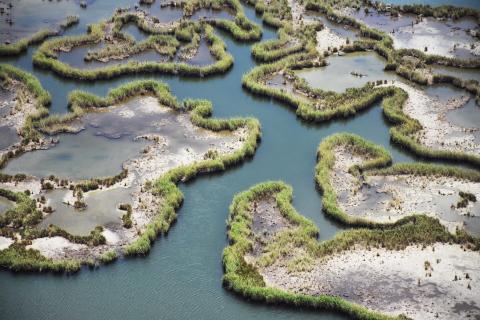 Tourists who will go on a journey between the labyrinth-like reeds within the boundaries of Muğla's Ortaca and Köyceğiz districts will enjoy watching herons, caretta carettas and Dalyan mullets.

The region in Turkey's west, which is rich in history, offers a dream-like holiday with its sweet and salty water and beach along with the ancient city of Kaunos.

Dalyan, where the glows in the water channels can be seen when viewed from the sky, and the İztuzu beach, located at the junction of the sea and the lake, draw the interest of holiday-goers.

In the region, which is among the frequent destinations of local and foreign tourists, there are reed areas that resemble a labyrinth when viewed from the air.

Tourists moving from Dalyan neighborhood to İztuzu Beach complete the tour by watching caretta carettas, herons and Dalyan mullets. The Dalyan canal is also home to many rare plant and animal species.

Among the best protected open areas in Europe and welcomes an average of 1 million tourists every year, the canal is now waiting for its visitors. After the novel coronavirus pandemic, the boats that will take tourists on a journey during the controlled normalization process also underwent maintenance and were docked in the channel.

Emphasizing that the ancient city of Kaunos and 2,400-year-old rock tombs on the banks of the Dalyan Canal with rare beauties add a different beauty to Dalyan, Erdoğan said, "We invite all visitors to our district and want them to discover these rare beauties of our region."

Özay Akdoğan, who has been operating a tourism...