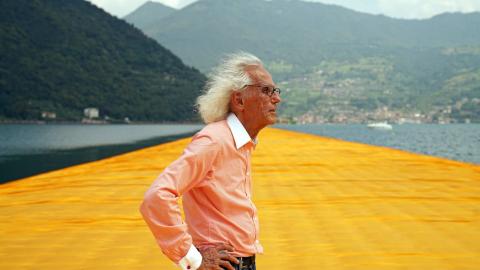 Influential contemporary artist Hristo Vladimirov Javacheff "Christo" passed away of natural causes at the age of 84 in New York, his representatives announced little before midnight on May 31. "Christo lived his life to the fullest, not only dreaming up what seemed impossible but realizing it," his office said.

Born in Gabrovo, Bulgaria, in 1935, he escaped the postwar communist regime when he was 22, living in Prague, Vienna and Geneva, before settling for a few years in Paris. There, in 1957, he met his partner and collaborator Jeanne-Claude, who passed away in 2009.

Together they made their trademark and often controversial temporary works of art, often including fabric-wrapped landmarks and landscapes, including the Reichstag in Berlin, the Pont-Neuf in Paris and New York's Central Park.

More recently, Christo attracted 1.2 million visitors to his project "The Floating Piers" in Lake Iseo near Brescia, Italy, and in 2018 presented another floating installation, "The London Mastaba", on the Serpentine lake in London.

"I like real things. Real things! Real wind, real draught, real rain, real fear, real joy," he said on the most recent documentary on his work, Walking on Water, by Andrey Paounov.

For the last 56 years of his life, Christo lived in New York.

He died while still working on several projects. His most recent temporary work of art in Paris is titled "L'Arc de Triomphe, Wrapped"  (Project for Paris, Place de l'Étoile) and is still scheduled for September 18 to October 3, 2021. Additionally, a major exhibition at the Pompidou centre about Christo and Jeanne-Claude's early in Paris will be on show this year from July 1 to October 19, 2020.