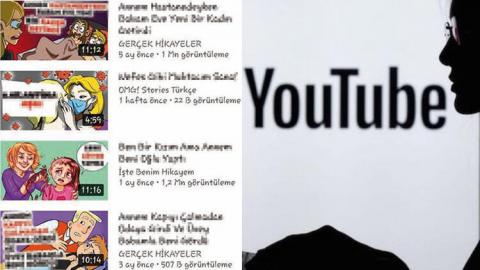 The Family, Labor and Social Services Ministry has taken legal action against four YouTube accounts broadcasting animations with child abuse contents.
The videos posted on the platform have had many views, ranging from 300,000 to 4 million.
The controversial videos, which caused huge public anger, was widely discussed on social media platforms under the hashtag #ÇocukİstismarıYouTube'da, (Child Abuse on YouTube).
Upon the public outcry, the ministry swiftly stepped in and filed a complaint with prosecutors about the accounts with the usernames, "True Stories," "My Story is not Finished," "This is My Story" and "Window of Life."
"In the videos, some expressions against public decency containing child abuse have been determined. We have contacted relevant officials," said the ministry in a written statement.
The ministry also warned parents to keep an eye on their children on social media platforms to see what they are watching.
After the ministry's complaint, the Information and Communication Technologies Authority (BTK) blocked access to the accounts on the video-sharing platform.
Also, the general directorate of security stated that all accounts with transgressive contents on social media platforms have been removed.
According to legal officials, the videos contain two types of offense: Child abuse and the praising of offense and the offender.
"Any abuse against children is a crime. It does not have to be physical contact. Any sexual act against children constitutes child abuse. Moreover, extolling a crime committed by writing a piece in newspapers, sharing posts online or broadcasting on YouTube can also be deemed as praising offense," said lawyer Umut Yıldırım.