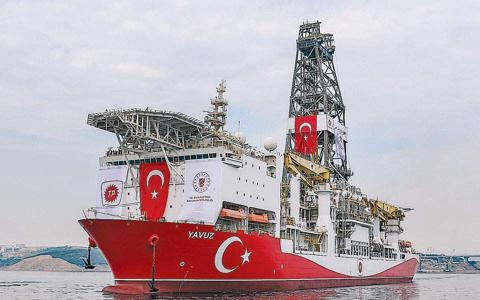 The publication in the Turkish government's gazette of a map outlining areas of the Greek continental shelf where Turkish Petroleum Corporation (TPAO) has applied for exploration permits has drawn an angry response from Athens, which warned it is fully prepared to respond in the event that Ankara chooses to conduct exploratory activities in these areas.

The map shows the 24 blocks that Ankara has demarcated from its shores to the point where its sea borders meet Libya, based on the maritime border agreement it signed with the North African country's internationally recognized Government of National Accord (GNA) last December.

The agreement has been fiercely condemned by Greece as a violation of its sovereign rights. It has been declared illegal by Cyprus, Israel and Egypt as well, while the European Union has also opposed it.

Greek art flying off the block