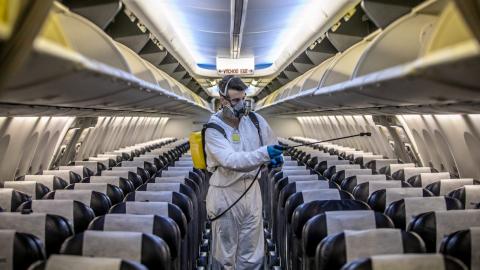 Visitors hold umbrellas as they walk at the empty quadrangle at Prague Castle in Prague, Czech Republic, 2020. Photo: EPA-EFE/MARTIN DIVISEK

The Czech response to the outbreak of COVID-19 was swift, and the tough lockdown proved effective, judging by current data. By May 27, the country had recorded 9,052 cases and 317 deaths - among the lowest numbers in Europe.

Although the borders with Austria, Hungary, Germany, and Slovakia are now reopened to business travellers and for some other short visits, there is no indication when the country will fully open its doors to foreign tourists.

Even once borders are open, worries over health will likely heavily limit visitor numbers.

The continued border closure means that tourism will continue to face a major threat. In the first quarter of 2020, foreign visitor numbers fell by over 26 per cent and the drop over April-June, when the holiday season has already started, is expected to be much bigger.

That will hit the economy in a country where tourism accounts for about 3 per cent of GDP. The state Czech Tourism agency warns that around 5 billion euros in revenue and up to 80,000 jobs could be lost this year.

Despite that, the government has yet to agree on any special support for the sector under its economic recovery package, which it claims totals over 37 billion euros.