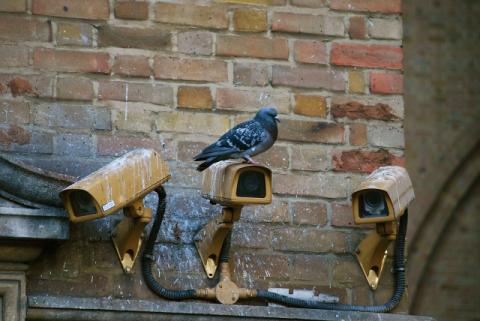 A pigeon has been arrested by police in India on suspicion of being a spy from Pakistan.

The bird was seized on Thursday after being spotted carrying a "stamped message" on its body.

The message was written partly in Urdu, the official language of Pakistan. It also contained a Pakistani phone number, according to reports.

The bird was discovered by a 14-year-old boy in the village of Manwal, around two miles from the border.

He took it to the nearest police station where the bird was X-rayed.

Although police confirmed nothing unusual was found they "have kept the bird in our custody", according to one senior local officer. The bird has been logged as a "suspected spy" in the area's official police diary.

"This is a rare instance of a bird from Pakistan being spotted here. We have caught a few spies here. The area is sensitive, given its proximity to Jammu, where infiltration is quite common," local police superintendent Rakesh Kaushal told the Times of India.

The area where the bird was found sits close to Jammu and Kashmir, an area which is claimed by both India and Pakistan, and is the scene of regular military exchanges.

But pigeons as spies? It wouldn't be the first time.

In fact until relatively recently carrier pigeons were the safest way of transmitting secretive information. You can't hack into a bird, and they blend into the background well. In fact, animals have a rich history as spies.

In 2012, David Martin was ripping out his fireplace at his home in Bletchingley, Surrey. Inside, he found a carrier pigeon with a coded message in a capsule on its leg.

Historians think the bird was almost certainly dispatched from Nazi-occupied...