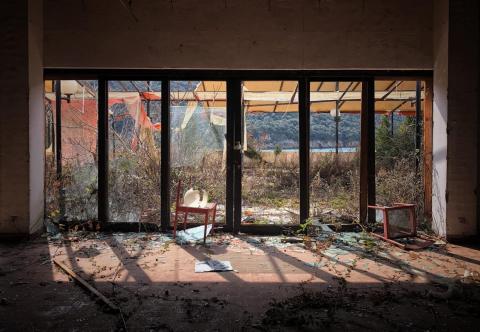 "For years we have been fighting for a just solution in the Valdanos case. Now we are demanding their return without a government obligation to compensate for any damage. We just want those olive groves back," Nimanbegu told daily newspaper Vijesti.

The return of the groves is a part of a coalition deal between the ruling Democratic Party of Socialists and the Albanci Odlucno coalition.

In 1978, the Federal Secretariat for the National Defence of Yugoslavia expropriated the land near the coastal town of Ulcinj from local residents for military purposes.

But in 1980, the Yugoslav military decided to use Valdanos as a holiday resort for members of its forces instead.

Plans were drawn up for a resort featuring two private villas, 29 duplex homes, camping grounds, trailers and prefabricated houses on the hills with breathtaking views of Valdanos Bay.

The military resort also had a supermarket, a pastry shop and a restaurant offering a 270-degree view across the bay. The restaurant had a spiral staircase which led down to the water.

As Yugoslavia collapsed, the military resort was left to decay. In 1993, the Yugoslav Navy assumed control of Valdanos with revived plans to convert the resort into a military base, but the Supreme Court failed to authorise the project.

People who had lost their land and property had taken their cases to the Supreme Court, arguing that the authorities had never used Valdanos for their stated original intended purpose of building a military base.

Since 2011, the Montenegrin government has tried to...