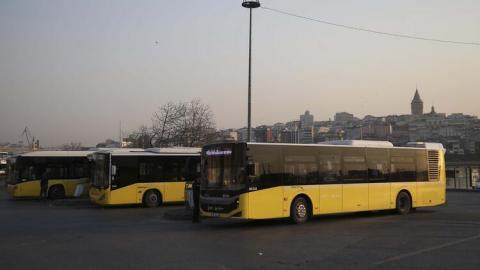 The Interior Ministry has lifted another transport restriction initially imposed to slow the spread of the coronavirus by removing the obligation that 50 percent of seats in public transportation vehicles should be empty.
The decision to remove the curb was taken in line with recommendations made by the Science Board, which advises the government on measures to be implemented against the outbreak.
Initially, public transport vehicles, including buses, shared taxis (dolmuş) and shuttle buses, which carry company employees, were required to operate at 50 percent seat capacity.
The ministry has issued a directive to the governor's offices in the country's 81 provinces and said that this regulation is now lifted.
However, those public transport vehicles are still not allowed to accept standing passengers, while travelers will not be seated facing each other.
According to the ministry's directive, the local sanitation boards in towns and provinces will have the authority to rule on whether standing passengers will be allowed on metros, metrobuses and trams.
Turkey this week moved into the normalization phase, removing a wide range of restrictions during the height of the outbreak.
Restaurants, cafes, museums, beaches, gyms and parks reopened on June 1 under the government's normalization roadmap. Inter-city travel restrictions were also lifted.