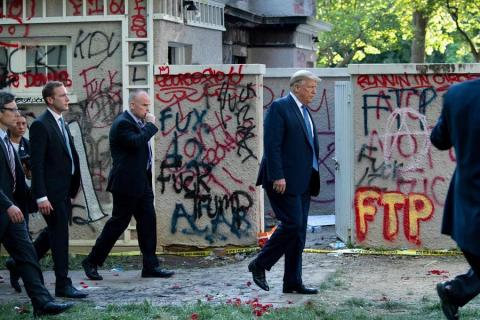 Wielding extraordinary federal authority, President Donald Trump threatened the nation's governors on June 1 that he would deploy the military to states if they did not stamp out violent protests over police brutality that have roiled the nation over the past week. His announcement came as police under federal command forced back peaceful demonstrators with tear gas so he could walk to a nearby church and pose with a Bible.

Trump's bellicose rhetoric came as the nation convulsed through another round of violence over the death of George Floyd at a time when the country is already buckling under the coronavirus outbreak and the Depression-level unemployment it has caused. The president demanded an end to the heated protests in remarks from the White House Rose Garden and vowed to use more force to achieve that aim.

If governors throughout the country do not deploy the National Guard in sufficient numbers to "dominate the streets," Trump said the U.S. military would step in to "quickly solve the problem for them."

"We have the greatest country in the world," the president declared. "We're going to keep it safe."

A military deployment by Trump to U.S. states would mark a stunning federal intervention rarely seen in modern

American history. Yet the message Trump appeared to be sending with the brazen pushback of protesters outside the White House was that he sees few limits to what he is willing to do.

Some around the president likened the moment to 1968, when Richard Nixon ran as the law-and-order candidate in the aftermath of a summer of riots, capturing the White House. But despite his efforts to portray himself as a political outsider, Trump is an incumbent who risks being held responsible for the violence.