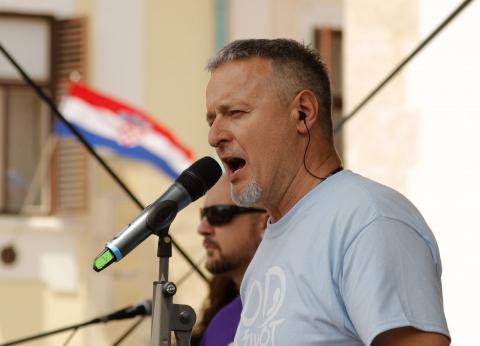 The Court of High Misdemeanours in Zagreb on Wednesday ruled that the controversial nationalist singer Marko Perkovic, widely known as Thompson, did not violate public order and breach then peace with his use of the chant "Za dom spremni" ("Ready for the homeland") in his song Bojna Cavoglave.

The slogan was popularised by, and remains associated with, the fascist Ustasa movement that ran Croatia under Axis auspices in World War II and is held responsible for widespread atrocities, especially against Serbs, Jews and leftists.

"With four votes in favour, 15 against and one abstention, it was decided that the described conduct in the specific case cannot be subsumed under the legal description of the violation of Article 5 of the Law on Misdemeanours against Public Order and Peace," the court ruled.

"As the judges… took different positions on Thompson's salute, all 20 judges of the High Misdemeanour Court were called to take the final position," the website Telegram explained on Wednesday.

The court also ruled that its earlier decision in the same case, issued in October last year, had been correct. The Sibenik-Knin police department had appealed against the first-instance verdict of the Sibenik Municipal Court from October 2018, which acquitted Perkovic of charges of misdemeanour for shouting "Za dom sprenmi" at three concerts, held in 2015, 2016 and 2017.

Human Rights House Zagreb NGO said in a press release on Wednesday that it was "appalled" by court's decision. "The fact that the disputed salute is part of the author's song does not change the fact that the Ustasa greeting 'Za dom spremni' symbolizes the criminal Nazi-fascist ideology and is contrary to Article 39 of the constitution, which prohibits any incitement to...