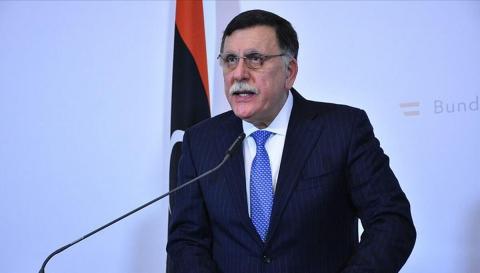 The prime minister of Libya's internationally recognized Government of National Accord (GNA), Fayyez al-Sarraj, will pay a visit to Ankara on June 4 for talks with President Recep Tayyip Erdoğan as Turkey's top security board has reiterated that Turkey's support to the Tripoli government will continue in its fight against General Khalifa Haftar forces.

In a televised interview on June 3, Foreign Minister Mevlüt Çavuşoğlu confirmed that Sarraj will arrive in Ankara on June 4 to discuss the recent developments concerning the ongoing armed conflict in Libya.

Turkey has been politically and militarily backing the GNA in line with an agreement Ankara and Tripoli signed in late 2019 that paved the way for the deployment of the Turkish Armed Forces (TSK) into Libyan territories to train and advise Tripoli's forces.

The Turkish intervention prevented Haftar forces from capturing Tripoli and other GNA-controlled areas in the western Libya despite the support the latter receives from France, the United Arab Emirates, Egypt and Russia.

"Haftar cannot win this war," Çavuşoğlu said in the interview, underlining that neither Haftar nor his supporters are in favor of a political settlement to the question.

"Haftar has no power except for the support he receives from external powers and warplanes he gets from Abu Dhabi and Egypt. Turkey has provided a new balance in Libya. If Haftar could be able to enter Tripoli with the help of these powers, the civil war would last for years," he said.

All the actors playing a role in the Libyan question, including France among others, should better realize that there is no military solution to the problem and acknowledge the success of the GNA as an opportunity for a...