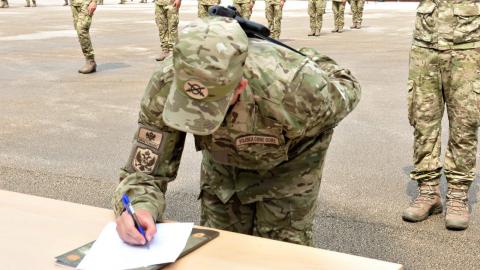 On March 11, the Defence Ministry suspended an army officer for joining the protests over the new religion law that the Serbian Church - the largest faith group in the country - says could strip it of its property.

It said Darko Mrvaljevic had broken the law. On February 20, army chief General Dragutin Dakic warned that any soldiers taking part in the protests risked being forced out, as there was no place in the military for those who place the Church above the law.

General Dakic said soldiers had a duty to defend the state in accordance with its laws and the constitution and cannot take part in political manifestations.

On TV station Vijesti, the general stressed that it was especially unacceptable for officers to participate in protests with visible political implications and where the flags of another state, referencing Serbia, were on display.

In response to the Ombudsperson, the Ministry of Defence stood by its ban, saying the protests were political and off-limits for army personnel.

"There were political messages and members of political parties at the protests. They publicly insulted people who declared themselves as Montenegrins and the state of Montenegro," the ministry said.

From December to March this year, tens of thousands of Serbian Orthodox Church clergy, believers and supporters held protests twice a week demanding the withdrawal of the law that the country's parliament passed in December 2019. Protests paused during the coronavirus pandemic.

The disputed law mandates the creation of a list of religious sites in the country, and says faith groups...