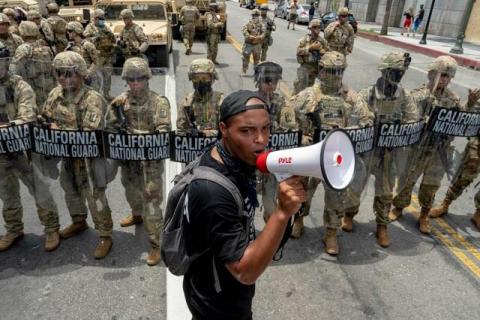 Foreign Minister Mevlüt Çavuşoğlu has urged restraint to the United States over ongoing mass protests in reaction to the killing of an unarmed black man at the hands of police in Minneapolis.

"It's not acceptable that the police could kill anybody regardless of his race, religion or faith in such a way," Çavuşoğlu told private broadcaster 24TV in an interview on June 3.

Citing racism as an ongoing problem in the U.S., Çavuşoğlu stressed the need for a proper legal action against the policeman responsible for the death of George Floyd in a bid to ease the conscience of the public.

"Justice must be done in a way that will relieve everyone's conscience regarding the police who committed this murder," he stated.

Although the people have the right to protest the incident, Çavuşoğlu said they should at the same time be cautious in not turning them into vandalism. "We do not support vandalism where it happens, not only in the U.S. We hope common sense will prevail soon. We are calling for calm," he said.

Upon a question, Çavuşoğlu slammed Greece for criticizing the reciting of verses from the Quran at the Hagia Sophia on May 29 as part of celebrations of the 567th anniversary of the conquest of Istanbul.

"Turkey will not ask for permission from anyone to recite the Quran or make calls to prayer," he said. "Hagia Sophia has been the property of the Republic of Turkey" since the conquest of Istanbul, he added.

Slamming Greece's objections to use the Hagia Sophia as "shamelessness," he said Athens is still "the only European capital lacking a mosque."

On a question on COVID-19, the foreign minister informed that 562 Turkish citizens died from the novel...