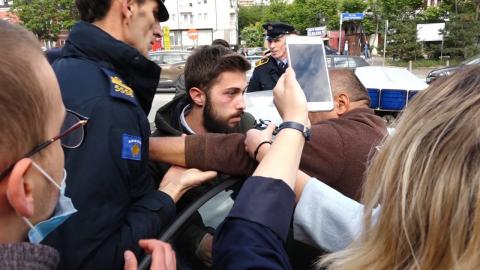 A Kosovo activist, Veron Hasani, has pressed charges against the bodyguards of President Hashim Thaci, after being detained for calling the president a "thief" and, he said, violently attacked.

On the local TV station T7, Thaci defended the action, calling Hasani "a Kurti activist" - meaning a supporter of Vetevendosje party leader Albin Kurti - and praising the actions of his bodyguards as an "excellent reaction".

Flutura Kusari, a media lawyer and advocate of freedom of speech, said the detention had been totally unjustified. In a Facebook post, she noted that "under the laws in Kosovo, calling a politician a 'thief' is not a criminal act". Therefore, she continued, "you cannot be detained by the police" for such words. According to Kusari, "there may also be circumstances when such a statement does not even constitute defamation".

The event happened on Wednesday afternoon, after Kosovo MPs had voted in a new government led by the deputy leader of the Democratic League of Kosovo, LDK, Avdullah Hoti, replacing the former government led by Kurti.

As President Thaci held a press conference in the government building courtyard, the Vetevendosje activist called him a "thief". Thaci's bodyguards then followed the man, later identified as Hasani, detained him with force and reportedly hit one of the people who demanded the reasons behind their actions. The bodyguards then took Hasani back to the government building.

Local media filmed the event and published clips later. In one of the videos, from local media outlet Indeksonline, one of the bodyguards can be seen approaching a journalist to stop him from filming. "I am a journalist, you cannot touch me," the journalist responds, showing his ID.

Later on Wednesday, his lawyer, Tome...