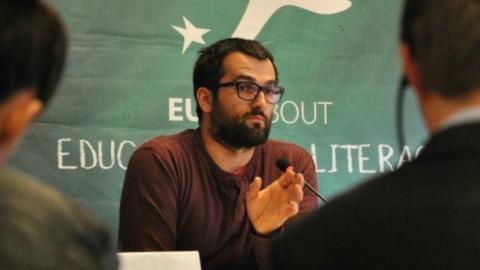 A group of over 40 civil society organisations in Kosovo said in a joint statement on Thursday that Shkelzen Gashi has been "threatened and insulted in the worst way by the general public, but also by many personalities and politicians including President Hashim Thaci".

Gashi was fired in April by then Prime Minister Albin Kurti amid a public backlash about his comments about crimes having been committed by individual Kosovo Liberation Army fighters.

The civil society organisations' statement said that President Thaci accused Gashi of making the comments because he hated the Kosovo Liberation Army, "deliberately misrepresenting" what Gashi had said.

The statement described the campaign as an attempted "public lynching" which proves that 21 years after the war, "in our country it is still extremely dangerous to open discussions on war crimes… in a society where a culture of impunity has taken root".

Gashi told BIRN that Thaci's comments have incited further reactions against him.

"I have never said that the KLA was a terrorist group and I have also never said that its members were criminals. I want to repeat once more what I said, that individuals within the KLA, including those who held high positions, were involved in crimes, especially after the war," he said.

Sami Lushtaku, the former mayor of Skenderaj/Srbica, who head the Democratic Party of Kosovo in the town, describesGashi as an "UDB-ash" (collaborator with the Serbian security services), and as a man who "hates the KLA and tries to criminalise it", and therefore also as a person who "hates Kosovo".

Kushtrim Koliqi, the head of Pristina-based NGO Integra, whose work focuses on peace, dealing with the past and human rights, said that the campaign against Gashi was ...