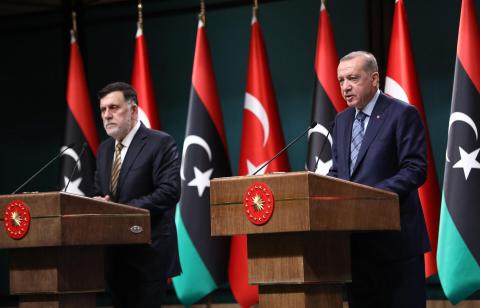 Recalling a memorandum of understanding for maritime delimitation sealed between Turkey and Libya, Erdoğan said, "We agreed to develop new cooperation."

"We aim to improve our cooperation, including exploration and drilling," Erdoğan said at a joint press conference with Libya's U.N.-recognized Government of National Accord (GNA) Prime Minister Fayyez al-Sarraj.

"The support we provided will continue increasingly," Erdoğan stated.

The president also welcomed the recent military success of the GNA forces.

Erdoğan said they discussed ways to lift embargos on Libya. "We are on the same page on the issue of the continuation of oil exports of Libya, he stated.

Erdoğan called on international actors to make efforts to prevent the "illegal" oil export of rival General Khalifa Haftar.
"The oil, which should be used by all Libyans, should not be allowed to be used by the putschists," he stated.

On a political process and solution under the auspices of the U.N., Erdoğan said that although Haftar and his militias have committed crimes against humanity and war crimes, the Sarraj government has always taken a positive attitude in this process.

Erdoğan stressed that a person who constantly threatens the future of Libya can no longer have a representation right to sit on the negotiation table.

"History will judge those who cause bloodshed and tears in Libya by supporting putschist Haftar," he added.

Referring to Libya's fight with COVID-19, Erdoğan said that despite Haftar's heinous attacks, the Libyan government took necessary measures against the...