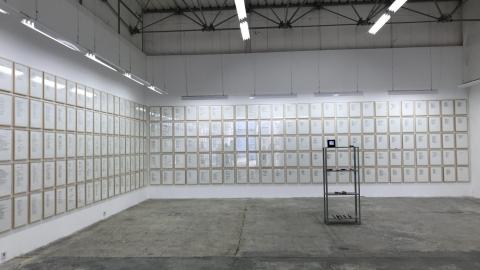 "Each drawing is specially framed and 400 of them carefully placed in neat rows form one monumental whole that encompasses the walls of the entire gallery," Miladinovic told BIRN.

"One of the ideas of this setting was to show the whole series in one place, to confront visitors with such important traces of the past, but at the same time with the impossibility of dealing with it," he added.

The artwork is based on a diary found by investigators behind a fake wall in a house in Belgrade in 2010 where Mladic was hiding when he was on the run from the Hague war crimes tribunal.

He was arrested the following year, and in November 2017, the Hague Tribunal sentenced him to life in prison for genocide in Srebrenica in 1995, the persecution of Bosniaks and Croats throughout Bosnia and Herzegovina, terrorising the population of Sarajevo during the siege of the city and taking UN peacekeepers hostage.

His appeal against his first-instance conviction is to be heard this year, but was recently postponed for a second time due to the coronavirus pandemic.

Mladic's war diary was used as evidence during his trial and in other cases heard at the Hague Tribunal. Miladinovic's artwork is based on the tribunal's English translation of the diary.

"Mladic kept his diary every day, which means that he wrote down important details of his activities by hand. This manuscript, apart from what is written in the notebook, is also significant because of the way he wrote things down. When he was angry or resentful, the handwriting...