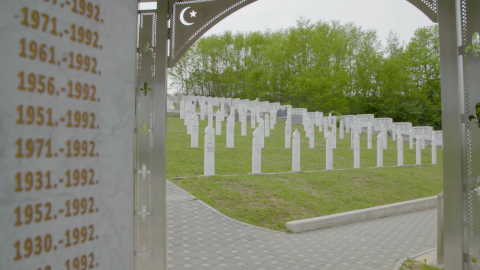 She said that after the relaxation of the pandemic restrictions, the court decided that trials of up to five defendants could start again on June 1. Those hearings will be conducted in two biggest courtrooms in the state court building in Sarajevo, where appropriate distance between all the participants can be ensured.

Nermina Alukic, a war victim who has waited for justice for more than two decades, is one of those who will be affected by this new delay to war crimes proceedings.

In 2015, Alukic testified at the state court about the murders of her father and brother in June 1992 in a massacre in the village of Zecovi, near Prijedor.

They were among more than 150 people who were killed in the attack, among them women, children and elderly people. The survivors were sent to detention camps, where some were killed and others were abused.

Thirteen people - former Bosnian Serb Army soldiers and policemen, as well as the head of the Serb Democratic Party and Crisis Committee in the village of Rasavci - are on trial in the Zecovi case. They are accused of involvement in murders, rapes, torture, robbery and the destruction of property.

"If it keeps going like this, God knows if I will live to see it," she said.

When the pandemic hit Bosnia and Herzegovina, the country's judicial overseer,...