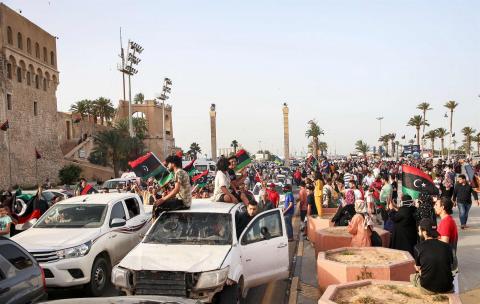 Libya's internationally recognised government regained control of Tripoli on June 4, driving eastern forces out of the capital after a 14-month battle in which foreign powers poured in arms and fighters.

In the recaptured southern suburbs, bodies still lay on the ground and fighters brandished weapons abandoned by the eastern forces, a Reuters visual journalist said.

In the city centre, civilians were glad the fighting was over. "It's an incredible feeling. People can now return home and there is no more shelling," said a 37-year-old man from the Ain Zara district, one of the areas taken, who asked not to use his name.

It represents a stinging reversal for eastern commander Khalifa Haftar and his Libyan National Army (LNA), which launched an offensive on Tripoli last year pledging to unite Libya after years of chaos.

Continued Russian, Egyptian and United Arab Emirates support for the LNA means the Government of National Accord (GNA), which is recognised by the United Nations and backed by Turkey, has little hope of carrying the war into eastern Libya for now.

But, with eastern forces withdrawing towards their northwestern stronghold of Tarhouna, the lines are being drawn for battles to come although both sides have agreed to resume U.N.-brokered ceasefire talks.

The arrival of heavier weapons, which the United States says include a fleet of Russian warplanes, means fighting could become far deadlier.

The U.S. ambassador to Libya, Richard Norland, said in a call with journalists on June 4 the situation had escalated dangerously, but...