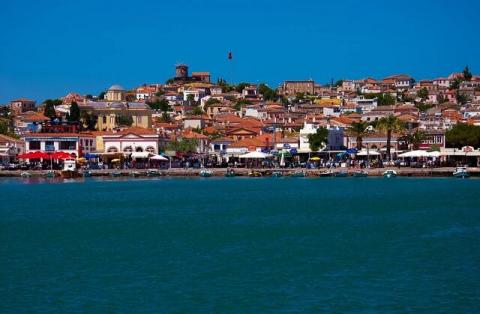 Cunda (Alibey) Island, which is one of the favorite tourism spots in the north Aegean region, has begun to host local and foreign tourists with its old Greek houses, many of which are boutique hotels, cobblestones, churches and the dishes of Greek and Turkish cuisine.

Among the 22 islands of Balıkesir's Ayvalık distict, which is described as the "Island City," only Cunda and Lale Islands have settlements. Cunda Island, which is accessible by road and by boats from Ayvalık through the "Bosphorus Bridge" opened in 1964, is among the most important tourism centers of the north Aegean and Edremit Bay.

There are some special spots to take photos on the island, which is home to houses with red, blue, green and pink colored louvres and can be visited by walking through the historical narrow streets.

Those who come to the island can take a photo in front of the tree, where hundreds of evil eye beads are hanging, on the bridge, where Turks first set foot on the island, in front of churches, at the entrance of some Greek houses, and on the Aşıklar (Lovers) Hill.

Taksiyarhis Church, which has been turned into a museum, is one of the most visited places on the island. Also, Cunda houses are worth visiting with their doors, door knockers, windows, wood and stone workmanship.

'Cunda ready for the new season'

Stating that the uncertainties caused by the coronavirus still affect people in some way, Çolak said, "The increase of temperatures and medical studies will be the reason for people to go back on vacation."

Reminding that there is a decrease...